A major affective factor in second or subsequent language literacy development is age. As mentioned above, most learners in literate societies begin their formal literacy education in their first language when they start school at about the age of five. However, most second language learners do not begin to learn literacy in a second language until they are older than this (Hammond & Derewianka 1999,p.30). some may be studying a second language at school or university while living in their own culture. Others may have migrated to a new culture where they must learn a second language in order to participate in the adopted society.
1. The passage above is … text.
a. narrative
b. exposition
c. recount
d. news report
e. none of the options are correct
Answer: b

4. Why does the writer mention the name Hammond & Derewianka in his/her writing?
a. To show that s/he reads more books
b. To tell readers that s/he has read the books
c. To mention the reader that s/he they are his/her friends
d. S/he wants to describe more facts about his/her ideas
e. S/he wants to support his/her point of view by quoting other ideas
Answer: e

Taking care of the keyboard

The keyboard is a roburts device used for inputting data on to your computer. As you type in information small letters are sent via the cable to the inside of the machine where they are organized into the words that you see. Keep your cable straight.

It is important that the keyboard cable has no kinks or that no object is placed on the cable to restrict the flow of letters to the machine. Care also must be taken that letters with sharp point do not become snared in the cable.

X’s and Z’s are the most common letters to be snared, and the result will be words appearing on the screen with these letters missing. O’s and D’s move the easiest through the cable.
To best take care of your keyboard cable stretch it out and straighten the kinks frequently. Letters are snared most frequently where the cable enters the machine, so be sure to straighten that section of cable on a weekly basis.

7. The most common letters to be snared are ….
a. X and W
b. X and A
c. X and Z
d. Z and A
e. A and X
Answer: c
Pembahasan: terdapat pada paragraph ketiga, kalimat pertama

8. To take care of your keyboard cable you should ….
a. straighten the kinks frequently
b. stretch the cable rarely
c. rolled the cable
d. let decay cable in use
e. none of the options are correct
Answer: a
Pembahasan: terdapat pada paragraf ketiga, kalimat ketiga

9. Keyboard needs to be cleaned so that ….
a. dirt move away
b. keyboard works slowly
c. dirt and grit spread away
d. it smell good
e. none of the options are correct
Answer: a 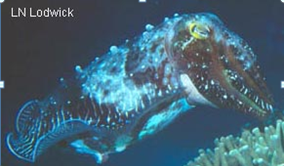 The Giant Austarlian Cuttlefish (Sepia apama) is found in waters from less than a metre deep to probably around 100 m off Southern and eastern Australia.
Description
Australian Giant Cuttlefish (a solitary creature) is by far the biggest type of cuttlefish growing up to a length of 1 meter and up to 3 kg. They have a big flat broad head with 2 large eyes with 8 tentacles (arms) and 2extendable feeding tentacles emerging from this head. The 2 feeding tentacles which are used for feeding retract into pouches between the bases of the third and fourth arm pairs. Along their sides they have thin fins.
It breathes like fish through gils.
Internally they have a spongy chalk like internal shell (cuttlebone) whice gives the body its shape. The cuttlefish has three hearts, which pumps blue blood

Slow movement is obtained by using its thin fins located along their sides. Propulsion is increased by using jets of water squirted out from a funnel. Australian Giant Cuttlefish swim eith their tentacles close to their body, and cuttlefish regulate their buoyancy by pumping water in and out of the gas filled cuttlebone to change the volume (and thus buoyancy) of the gas to enable them to maintain the depth they wish.

Cuttlefish have the ability to change their colour to match their background, even the texture of its skin to be more like sand or seaweed and can push up fingers of soft skin to impersonate the shape of seaweeds or rubble.
They can also eject ink from ank ink sack just like an octopus to confus and disorientate enemies so it can escape. 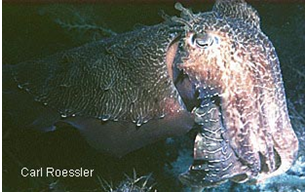 They actively forage amongst seaweeds and sea grasses catshing shrimp, fish, prawns, crabs and other crustaceans. They use their 2 extendable feeding tentacles to snatch their catch, which is then mashed up by a hard “beak” (jaws).

Individuals breed from April to July. This is the time they come closer to the surface and thus can be observed A courting and mateship dance ends up with the male and female entwining their tentacles together. The eggs (hundreds)are then laid a short time later often in litle coral caves or on rocky reefs further south. The eggs take a couple of months to hatch.

10. The passage above is … text.
a. narrative
b. exposition
c. recount
d. news report
e. report of information
Answer: e

12. To which part of information criteria can you find about the weight of this giant cuttlefish?
a. habitat and location
b. breeding
c. feeding
d. description
e. movement
Answer: d

13. The followingtimes that are suitable for breeding of giant cuttlefish is ….
a. June
b. August
c. September
d. October
e. November
Answer: a
Pembahasan: terdapat pada paragraf terakhir