Long long ago there was a kingdom in West Java. The kingdom was ruled by king. People called their king His Majesty Prabu. Prabu was kind and wise king. No wonder if that country was prosperous. There’s no hunger in this kingdom.

It was very happy condition. But it was pity that prabu and his queen hadn’t got any children. It made the royal couple very very sad. Some old man who wa respected by Prabu suggested the king to adopt a child. But Prabu and the Queen didn’t agree.

Old man          : “Why you don’t agree Prabu? All people in this kingdom want just ypur child who change when you not rule this kingdom.”

King    : “Because for us, our own daughter or son is better than adopted children. Do you think like that my wife?”

Queen  : “Yes, I think so. Our own daughter or son is better than adopted children.”

The Queen was very sad. She often cried. That was why Prabu decided to go. He went to the jungle. There he prayed to God. Everyday ge begged for a child.

His dream comes true. A few months later, the queen got fregnant. All people in the kingdom felt happy. They sent many presents to the palace to express their happiness.


the kingdom    I feel happy if Queen get fregnant.”

Nine months later a princess was born. People sent their presents again as a gift to a little princess. This baby grew as a beautiful teenager then.

Prabu and Queen love their daughter so much. They gave what ever she wanted. It made Princess a very spoiled girl. When her wish couldn’t do that. Even though the princess behaved badly, her parents loved her, so did the people in that kingdom.


Day by day, the princess grew more beautiful. No girls couldn’t compare with her. In a few days, Princess would be 17 years old. So, people of that palace. They bought many presents for her. Their presents gift were very beautiful. Prabu collected the presents. There really many presents. Then Prabu stored them in building. Sometimes he could take themto give to his people.

People in         : “Your majesty Prabu, this is I bring a present to you beautiful daughter.


the kingdom    I’m  sorry I just can give your daughter like this. Please accept my present.”

Prabu only took some gold and jewels. Then he brought them to the gold smith.

The goldsmith worked with all his heart and his ability. He wanted to create the most beautiful necklace in the word because he loved the princess.

Goldsmith       : “This is the beautiful necklace. I make it with my heart and my ability. I hope you happy with this necklace.”

The birthday came. People gathered in the palace field. When Prabu and Queen appeared, people welcomed them happily. Prabu and his wife waved to their beloved people.


Cheers were louder and louder when the princess appeared with her fabulous pretty face. Everybody admired her beauty. Prabu got up from his chair. A man gave him a small and glamorous pillow. A wonder full necklace was on it. Prabu took that necklace.

King                : “My beloved daughter, today I give this necklace to you. This necklace is gift from people in this country. They love you so much. They presented it for you to express their happiness, because you have growing to a women. Please wear this necklace.”

Then she threw the necklace. The beautiful necklace was broken. The gold and jewels were spread out on the floor.

Everybody couldn’t say anything. They never thought that their beloved princess would did that cruel thing. Nobody spoke. In their silence people heard the queen crying. Than everybody was crying.

Then there was a miracle. Earth was crying. Suddenly, from the underground, a spring emerged. It made a pool of water. The place was getting full. Soon place became a big lake. The lake sank all of the kingdom.


Nowadays the water on that lake is not as full as before. There is only a small lake now. People called the lake “Talaga Warna”. It is mean “Lake of Colour”. It’s located in Puncak, West Java. On a bright day, the lake is full of colour. 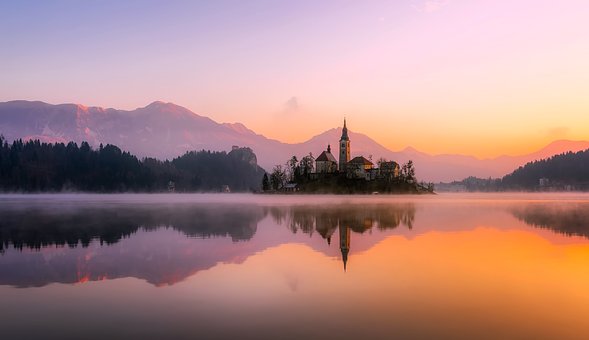 So beautiful and amazing. These colors come from shadows of forest, plants, flowers, and sky around the lake. But some people said that the colours are from the princess’s necklace, which spreads at the bottom of the lake.